A Simple Plan To Force Fannie & Freddie To Work With Homeowners!

I've Got It! A Simple Plan To Force Fannie & Freddie To Work With Homeowners!

By now, most of you have heard of the 17 banks that are going to be sued by FHA, Fannie/Freddie, etc.  Some screamed with glee (finally the banks are getting theirs!), while others critcized the plan, saying it would only help to slow down an already anemic lending market, as banks will be forced to pay huge sums of money as a part of the lawsuit.

Personally, I think the lawsuits are a joke. They are not only yet another waste of taxpayer dollars (as Fannie/Freddie losses have been funded by the American taxpayers since 2008), but they are also being used to cover up the root of the problem, which is Fannie/Freddie themselves.

You see, Fannie/Freddie have cost the American taxpayers $170 Billion thus far, and are expected to cost us $400 billion by the time all is said and done.  How are they costing us this much?  It's very simple, actually.  Whenever Fannie/Freddie foreclose on a loan and sell the home as an REO, they are reimbursed by the federal government (i.e. you and me).  So, let's say they foreclose on a home with a $200k mortgage, and they sell it as an REO for $100k.  Yep, you guessed it.  WE send them a check for the $100k to "make them whole".  With this type of arrangement, why would they ever consider working with homeowners on a loan modification or short sale?  Why not just rush to foreclosure and get paid? 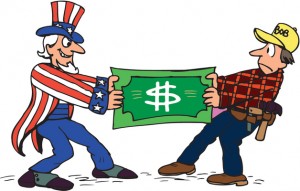 Last year, Fannie/Freddie issued guidelines for their servicers in regards to foreclosure timelines.  To make a long story short, they began penalizing servicers (with fines) for not foreclosing in what they call "a timely manner".  In other words, if you choose to work with homeowners, we'll fine you.  Nice, huh?

So, what's my plan to fix this nightmare?  It's very simple.  Set up an independent consumer complaint department for those homeowners that Fannie/Freddie have turned down for either a loan modification or a short sale.  For those borrowers  that Fannie/Freddie refused to work with, they will not receive a dime from the taxpayers in the form of reimbursement, should they choose to foreclose.  Yep, it's that simple!  Quit rewarding bad behavior, and we'll see things change.

The problem is, this idea would NEVER be considered.  Why, you ask?

Fannie/Freddie have spent over $200 million in lobbying/campaign conributions on Capitol Hill in the past 10 years.  As of 2008 (the last time anything was published on the matter), the top three recepients (in terms of total campaign contributions) were Chris Dodd, Barack Obama, and John Kerry (in that order).  So, chances are, we won't see anything change in the near future.  From 2005-2008, Fannie/Freddie contributed over $4.5 million to the campaigns of lawmakers in Washington.  Most of the funds went to those members who sit on the committees that are in charge of governing them. In 2009, the top 10 executives at Fannie/Freddie received over $40 million in bonuses for their stellar efforts.  Do you see the crux of the problem?

On Thursday night, President Obama will be announcing his new plan for the economy, jobs, and hopefully the foreclosure crisis.  So, I'm sure it's too late for me to send my grand plan to him for consideration.  Wait, who am I fooling?  Why would he, or any other lawmaker in Washington for that matter, bite the hand that feeds them.  Oh well, wishful thinking.

Seriously though, call your lawmakers and tell them about this simple solution.  I'll be forwarding this blog to the congressmen and senators that represent Arizona.  Who knows, maybe someone will listen this time?

Looking For A Dedicated Phoenix Realtor? Let me GOOGLE one for you!

Copyright © By Bob Hertzog 2011 *I've Got It! A Simple Plan To Force Fannie & Freddie To Work With Homeowners!