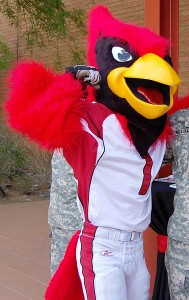 Fans from all over Arizona have the chance to do something they have never done before, see the Arizona Cardinals football team hold their Training Camp at The University of Phoenix Stadium.  In the past, those from Phoenix, Scottsdale, Glendale and the other surrounding areas had to travel to Flagstaff to watch them team get back into the swing of things training camp. While the weather is certainly cooler a couple hours to the North, the availability to take in an afternoon practice on a whim was not something that was a reality prior to the Cards moving training camp to Glendale.

Transferring the practice schedule to The University of Phoenix Stadium, the team has given a much wider fan base the ability to see their hometown team prepare for the upcoming season.  Free admission gives fans access to Cardinals training sessions from July 25 – August 22, 2013.  Concession stands are open and available for the fans to purchase food throughout the practices. Parking is also free and fans can either watch the players practice or take the kids to the Kids Zone for some football activities for kids.  The Kids interactive zone includes an inflatable obstacle course and other football related activities.  Following each practice, players will be signing autographs.  The doors are open from 2:00 p.m. – 4:35 p.m. any date that the team is holding a practice.

Cardinals fans are some of the most loyal in the league. With the move to the Phoenix area , more fans will be able to view their hometown team and introduce their families to a new experience that has proved, thus far, as a positive move for the Cardinals Football team.