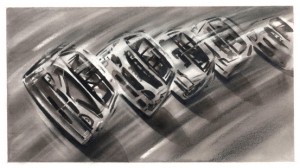 It’s been a long time since Carl Edwards took the checkered flag (70 races to be exact), but on Sunday, March 3, at the Subway Fresh Fit 500 NASCAR Sprint Cup race, Phoenix race fans got to see his signature backflip. He bested Daytona 500 winner Jimmie Johnson and Denny Hamlin, who fought neck and neck for 2nd place. Johnson crossed the finish line a fraction of a car length ahead of Hamlin. Carl Edwards, a Roush Fenway Racing driver, lead 122 of 316 laps.Edwards said, ''This win feels as good or better as any win I've ever had.” He had a rough go of it at Daytona, wrecking five cars. As he left that track, he said he couldn’t wait to dominate at Phoenix, and clearly, he’s a man of his word.Mark Martin, who started in Phoenix with a pole position, had a great day and many thought he would take the win. But after having to pit unexpectedly for right-side tires, he lost a lap and never could regain his position. Martin said, ''Obviously, it's a disappointing result for a great effort on the weekend. The car was pretty fast, but we had multiple problems today.'' The 54-year-old became the second-oldest driver to start on the pole in a Sprint Cup car.

Danica Patrick, another driver that many NASCAR fans have had their eyes on since she took the pole position for Daytona, left the race after crashing hard on lap 186. Her right tire failed her, causing a crash with David Ragan and forcing both drivers out of the race. Neither were injured. Patrick became the first woman to win a pole and lead green-flag laps during NASCAR's season opener, giving her a renewed fan following.

Jimmie Johnson’s 2nd place finish in Phoenix gives him the Sprint Cup series points lead. The next race is the Kobalt Tools 400 at the Las Vegas Motor Speedway.

For more information about available Phoenix homes, please contact me. I’m a local real estate agent and I’d love to help you find the Phoenix home of your dreams.