When looking at total sales, December sales of 7,840 bucked the downward trend we have been seeing since June, when total sales came in at 11,125.  Overall, December represented a 9.7% increase over November sales.  There were several other promising statistics that came in for December/2011.  What a great way to end the year!

ARMLS recently released the numbers for December/2011 in their monthly STAT Report, and the results are mixed.  Here is a breakdown of what happened in December in the Metro Phoenix Real Estate Market:

Sales (Month over Month)- Sales were up 9.3% (compared to November/2011), with a total of 7,840 closed listings.   This is the first time since June that sales have increased month-over-month.  Advantage:  Seller

New Inventory- This metric has been following a downward trend since April, and December was no different.  December's new listing figure of 7,339 is the lowest since December/2004 (7,117).  At its peak in March/2006, new listings hit a high-water mark of 16,686.  December's figures come in at 44% of the all-time high. This is seen as a positive metric.   Advantage:  Seller

Total Inventory-   Overall, in 2011, this metric has been a downward trend, and December was no different.  In January/2011, we had 42,881 homes on the market.  December came in at just 24,172, which represents a 42.4% drop from January's high.  This metric continues to go in the right direction, as a reduction in total inventory plays a major role in the supply/demand balance, which is extremely critical in correcting the Valley's pricing challenges.  Advantage:  Seller

Months Supply Of Inventory (MSI)- This metric has been going up steadily since June, but took a downward turn in December, finishing at just 3.15 months of inventory. To put this in perspective, in December/2007 we had an MSI of 15.98 months.  December/2011 came in 80.4% lower than the MSI in December/2007. Generally, an MSI below 4 indicates a seller's market, between 4 and 6 represents a balanced market, and above 6 represents a buyer's market.  Advantage:  Seller

Sales Prices- The median price rose almost 3% to $117,000 in December, compared to November ($115,000).   Average sales price rose slightly from $161,600 in November, to $162,200 in December. In my opinion, this is the metric that will eventually tell us that we have "hit the bottom" in the Metro Phoenix market.  We need to see several more months of this appreciation to call it a "trend", but I'm very happy to see this number increase.  It is no doubt due to the continued decline of REO (bank-owned) sales in the market.  Advantage: Sellers

Foreclosures Pending- Dropped from 22,389 in November to 19,979 in December.  Beginning at the high-water mark in November/2009 (50,568), this number has dropped every month since then, and represents 39.5% of the all-time high. Foreclosures pending has now dropped 22 out of the past 24 months.  This is a HUGE improvement over the high of 40,641 in January/2011.  This is a very important metric, as we all know that coming out of this mess will depend heavily on the amount of foreclosures on the market.  Advantage: Buyers

Distressed Sales-Distressed sales, which comprise of the total number of bank-owned and short sales, are the main source of the problem in our market (depressed pricing).  Distressed sales as a percentage of actual sales reached a market high of 74.1% in September/2010.  In December/2011, distressed properties (4,691) represented just 59.8% of total sales.  Several months ago, I predicted that short sales would overtake REO/Bank-Owned Sales, and it appears that this has finally happened!  In December, there were 2,165 lender-owned sales, and 2,526 short sales.  This is fantastic news!  More and more homeowners are understanding the short sale process, and the many benefits that come with a short sale versus a foreclosure.  There is no doubt that if this trend continues, we will continue to see a steady increase in both the average and median sales prices in the months ahead.  Advantage: Sellers

Short Sales- The number of short sales in December increased by 19.2% to 2,526, representing 32.2% of total sales. As stated above, I expect this number to continue to trend upward, as more Phoenix short sale agents are getting better at understanding the short sale process.  Lender-owned and short sales continue to dominate the market, representing almost 60% of total sales in the Phoenix market.  Our team of Phoenix short sale agents are ready to help, if you are considering a short sale.  Advantage:  Buyers & Sellers (short sales are better for the overall health of the market when compared to REO sales!).

Avg Days On Market- Increased in December to 95 days.  As short sales begin to dominate the market, we expect to see this number increase during 2012.  Advantage:  Neither Seller or Buyer 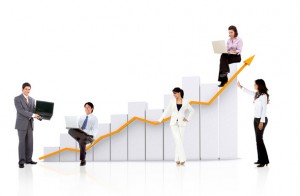 So, what do you think?  Is it a seller's market or a buyer's market?  I still think we are temporarily faced with a seller's market.  Inventory dropped even lower, which makes it more challenging for buyers to find homes, as our current inventories are now at historic lows.

The good news is that we are seeing positive news in several areas.  Total sales rose, which is typical of the last month of the year, and the continued decline in inventory is a very positive sign.  Months of Supply Inventory (MSI) and foreclosures pending came down in December as well.  The biggest news to report is that short sales are now outpacing foreclosures.  Should this trend continue (and I believe it will), we should start to see an increase in our average sales prices, which will be a sign that we are headed to recovery.

There was some positive news that came out of the 48th Annual Economic Forecast Luncheon on December 7th.  Economists are saying that the Arizona economy is no longer "on life support", but is now beginning to proceed through a slow economic recovery.  It is now predicted that Arizona will end 2011 as a top-ten growth state, now adding jobs faster than the national average, after a weak start the first half of this year.    Lee McPheters of JPMorgan Chase is predicting that Arizona's population should increase by 1.5% in 2012 to support housing demand, including a 20% rise in single-family housing permits.  Credit bureau Transunion is predicting that mortgage delinquencies will fall more sharply in Arizona than any other state in 2012.  It also is predicting that past-due Arizona mortgages will be cut nearly in half over the course of the year.

If you are a buyer, hang in there!  While there are some incredible deals in this market, you have probably realized (or will soon realize) that trying to purchase a home in this market is a daunting task, especially without the assistance of an experienced Phoenix buyer's agent.  We are working hard to find homes for our buyer clients, but with inventory being so low, its been difficult, at best.  For our clients reading this, keep checking your email inbox, and call us immediately when you see something you like.

When it comes to finding a home, TIME IS OF THE ESSENCE.  If it's a good deal, expect multiple offers in the first 24-48 hours, and be ready to "go in strong".  One more piece of advice for our buyer clients...If you are trying to obtain financing, STAY AWAY FROM THE INSTITUTIONAL LENDERS (i.e. Wells Fargo, BofA, CitiMortgage, GMAC, etc.) and Mortgage Brokers, and work with a MORTGAGE BANKER.  The "big-banks" have literally screwed up every deal we've worked on in the past 3 months.  This is not an anomaly, it is a trend.  They have tightened their purse-strings, and are creating major headaches for our buyer clients.  Work with a mortgage bank that can close your loan in-house, and has in-house underwriting.  We have a list of qualified mortgage banks in the Metro Phoenix market that can close your loan in 15-20 days.  The average institutional lender is having a difficult time closing a loan in 60-75 days, if they can close them at all.  PLEASE do everything you can to work with a qualified Mortgage Bank.  There is nothing more frustrating than waiting 3-4 months for a short sale to be approved, only to lose it because your lender couldn't get it done in time.

Now more than ever, you need a seasoned professional to walk you through these tumultuous times, not a part-timer.

Call me today and allow us to set up a plan to help you buy/sell your next home.  You'll be glad you called.